When I lived on E. 13th Street, I tried growing a container garden on my fire escape.  This worked pretty well, except when I was watering and inadvertently watered the local drug dealers.  I abandoned my horticultural explorations ’til we moved to the burbs.

Our first house had a postage-stamp sized yard, so there wasn’t room to grow more than a few blades of grass.  That, and I was in an ongoing battle with the family of skunks that lived under our front door, so I didn’t have much time to devote to growing things.  I don’t need to tell you about skunks during mating season.  I wish I didn’t know about it.

When we moved to our second house, I started a vegetable garden.  Organic, natch.  So basically everything started growing, but was then chewed to bits by all sorts of creepy crawly things.  So I bought ladybugs and lacewings in bulk.  Let 1000 ladybugs loose in the backyard last year, but they seem to have a really strong preference for the indoors.  Our house is infested with the adorable little things.  In fact, I found one in my hair today, right after I took a shower — had no idea they were impervious to water.   Good thing it’s hard to be creeped out by a ladybug — imagine if it was a slug — blegh!  As for the lacewings — I think they were damned before they even got out of the box — haven’t seen hide nor hair of them since (not that they have hide nor hair).  Next year, I’m going with praying mantis — just because they look so cool.

Two years ago, I discovered that one part of the garden was vulnerable to squash blossom rot, so I tried rotating my crops.  Rot follows.  Doesn’t have far to go, as the garden is only 25′ x 6′.  Will stop planting squash.

Last year, I discovered organic pesticides.  They don’t work.  No matter, because the bugs are no longer an issue, the mammals are.  And let me give you a run-down on all the pungently odiferous solutions I’ve tried: fermented salmon, fox urine, bat guano, garlic spray, homemade chili-cayenne and black pepper glaze and, in desperation, straight cayenne, directly onto the leaves.  Noticed real bite marks in the leaves this spring — not bugs, but animals, stripping the leaves off everything.  Apparently, the critters in Scarsdale NY prefer their produce properly spiced. Spinach, lettuce, beets, snow peas, string beans, sunflowers decimated.  Fenced in entire garden,  only to discover that I had fenced the evil creatures in, not out. 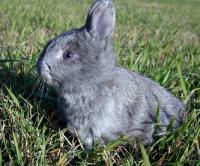 Entire family of bunnies living in my garden — they hopped out of their little rabbit hole to a veritable buffet.  So freakin’ cute!  Told my 5 year old that we may not have veggies, but I’m buying a gun and we’re gonna have rabbit stew.  He didn’t like that too much.

Rabbits  moved out, replaced by big, sleek, corpulent gophers.  They eat everything, including flowers and trees. Anyone got a recipe for braised gopher?