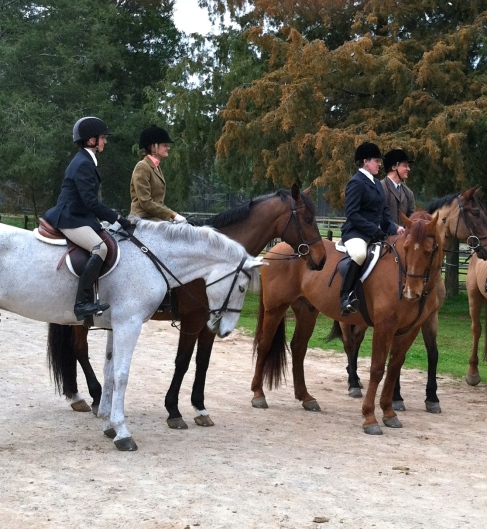 My first fox hunt — Belle Meade Hunt Club in Thomson, Georgia — very fancy.  I learned lots of fancy new things, like you don’t call them dogs, they’re hounds.  Unless they’re male hounds and then they are dogs.  So instead of saying hound dog, e.g. hound male, I guess we should be saying dog hound, e.g. male hound.  Anyway, the females are just bitches, but you knew that.  You don’t hunt in a particular area or piece of land, it’s a territory.  The territory that is across the street and which is five steps away from you is different from the territory you’re currently in.  Don’t say, “this is a beautiful place to ride,” say, “this is lovely territory.”  Are we on some sort of Williams and Clark expedition?  Flasks and sandwich pouches are mandatory and while I’ve never seen so many flasks in all my life, I did not see a single sam’ich.  I think those pouches hold more flasks.  Yes, you must share your flask, communicable diseases be damned.  Guess we’re all counting on the alcohol to kill those nasty germs.  Refreshment truck arrived mid-hunt, carrying beer and bourbon.  Nothing for the horses, hounds or tee-totalers.  One of the hounds was loaded into the truck, hurt paw or too slow or some sort of thing.  As we galloped away, we were invited to toss our beer cans into the bed of the truck.  One of the Yankees in our party did not have the greatest aim —  nailed the hound on the noggin — he yowled as Coors Light dripped down his snout.  Belle Meade is fancy, but we, clearly, are not.

Over the river and through the woods….

if only that’s the way our trips to grandmother’s house would go.  But no, our most recent sojourn to Mimi’s place was a lot more like “over the Throg’s Neck and through the puke.”  Allow me to explain.

On a sweltering summer day, I decided that it was high time for me, stay-at-home-mom that I have become, to take the kids to grandma’s house for a relaxing visit and swim in their pool.  Ha!  Loaded all three kids, all of the swimming and relaxing and distracting accoutrements each of them required and added the two dogs.  Our own loving and beloved spaniel mix and our current foster puppy, who I am now convinced is not a Golden Lab and Beagle mix as we were told, but a Pit Bull-Jack Russell cross.  He is very affectionate, but – well, yesterday I turned around and he was standing on top of the kitchen table.  Anyway, said foster puppy was highly reluctant to enter the mini-van, so I added all sorts of toys, treats, bones, etc to entice him in.  And yes, I did take water and food away from both dogs about an hour before we were scheduled to leave, to avoid any bodily function disasters.  On the dogs’ part, anyway.

10 minutes into the trip and just as we entered the bumper-to-bumper traffic that precedes the Throg’s Neck Bridge, an unmistakable and overwhelming odor wafted through the van.  Everyone under the age of 21  began screaming, crying and mock-retching while I exploded into an unprecedented (even for me) string of expletives.  Everyone in that car can now make sailors blush on four different continents (not that they couldn’t before).

Pile of dog poop on the back seat, quickly followed by and even larger pile of dog puke.  I jumped the curb, pulled onto the median and no, our 6 year-old Honday Odyssey mini-van is not 4-wheel drive, so I had no idea if we’d ever make it out again.  I found some old newspapers and plastic bags and with 6 trial-size bottles of Purell, managed to clean up the worst of the mess.  Got back in the van, fought our way off the median and into traffic.  Every other driver was screaming at me and honking their horns, and I screamed back, until my youngest said “I know why they’re yelling at us!  The back door is open!”  Yeah, mom of the year drove over the Throg’s Neck with the rear hatch wide open.  Luckily, no children, animals or prized possessions were lost, though their innocence certainly was.

Mouse update: dead and flattened mouse seen in location of release.  Ironically, flattened mouse appeared to be running back in the direction of our home.  Don’t tell me he didn’t know a good thing when he saw it!