does Sad Panda have a dating life?

As far as I can tell, Sad Panda in Old Town, Poland, is a young woman, slim (for a Panda), with great hair and elegant hands.  She must be dating, right?  How does that go for a sad panda?

SP: I wear a panda costume and sit in front of the Royal Castle in Old Town and hold my head in my hands.  If it’s a slow day, I sob audibly.

Date: does that pay well?

SP: it depends on the day.  I put out a can and people throw money in if they like me.

SP: no, I’m a performance artist.

Date: How many Panda suits do you own?

Date: doesn’t it get hot and sweaty?

Date: how do you clean it?

SP:  how do you clean a Panda suit?

Date: You sit in a public place acting sad, wearing the same stinky outfit day after day, with a can for money in front of you.  But you’re not a beggar.

Date: are you drunk when you do this?

SP: no, but I think I’m going to get drunk now.

James Bond Has a Video Studio

yup, this is what I do at work all day

The photography in the July 13 NYT Sunday Magazine essay was breathtaking; romantic images of childcare providers and their charges.  Almost as romantic as the writer’s notion that the reason babysitters/nannies/childcare providers are so poorly paid is because mothers feel guilty about the transaction; paying someone to love their child —  whom they have (presumably) chosen not to — at least during business hours.  What’s the excuse, then, for why mothers are not paid at all when they choose to stay home and love their children themselves, 24-7?  Honestly, I don’t think there’s a mother, in the home or out of the home full-time or part-time, who could claim to love her children 24-7 – but that’s another matter entirely.  The low pay isn’t a function of guilt — it’s a function of childcare being (traditionally) women’s work.  And women’s work isn’t valued, even though we are charged with raising the world’s next generation, and by extension, making sure the world survives another hundred years or so (now there’s some guilt).

We all know the story of how typing was a well-paid position, held by men, when typewriters — complex, mechanical instruments — were first introduced.  Once it was discovered that women could type and that they could do it better and faster than men (thank you, manual dexterity, for my exceptional typing skills and my unique ability to remove a dried pea from a 2-yr old’s nose) it became a typing “pool” — nameless, faceless, devoid of any individuality or humanity — and populated almost entirely by low-paid single women who were treading water while waiting for their knight in shining armor to appear.  The message is clear: if a woman can do it, it isn’t worth jack.

I love my job, but no one pays me to love it – I get paid to do it.  Period.  The idea that we don’t pay women to take care of our children because we feel guilty buying love is not only delusional, it’s insulting.  I chose my career.  So did my babysitter.  She deserves the same respect and renumeration accorded to all professionals.  I don’t pay her to love, I pay her to keep my children clothed, fed and safe; and that she does, far better than I can.  There are women who are paid to “love” but the job description is quite different and their clients aren’t children (though they do sometimes wear diapers) and the price that all involved pay is far greater. 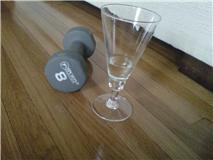 it's a spritzer, for God's sake!

“It’s fine,” he said, “I just wanted to confirm what I was seeing – do you know what time it is?”

Being laid off might have given me some time to smell the roses, except that I can’t find any damn roses to bury my schnoz in — are roses just totally outre in the gardening world?  But I did manage to find wild strawberries down by the dead end that we all “walk” our dogs to (read: take our dogs to pee and poop so we don’t besmirch our own precious emerald-green suburban lawns).

i take credit for this

I do take credit for this, one, because my dog and my foster dogs’ poop have provided ample fertilizer and two, I believe that the rabbits that raid my garden (including my strawberry patch) on an hourly basis pooped out the strawberry seeds at the cul-de-sac (it’s a dead-end anywhere else, but this is Scarsdale), so yeah, it’s all me.  All me, all the time, with nowhere — no job — to go to, and if that isn’t a buzz-kill, I don’t know what is.  Wish me luck.

Error: Twitter did not respond. Please wait a few minutes and refresh this page.