Greece is the word 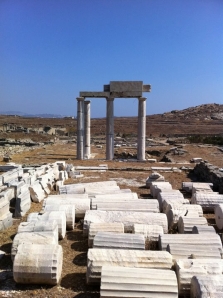 Old Ruin (like me - broken beyond repair - but not actually me)

A week in Greece, touring ruins — old ruins, new ruins, feeling ruined in all sorts of ways.  Old ruins like Delos, the Parthenon, Ancient Thera, the usual.  New ruins like the hundreds, if not thousands, of abandoned construction sites.  Despite the protests of the locals — “each year is better than the last,” the half-built buildings with rusted iron stabilizers sticking out, open bags of concrete and picked over shells of cranes that clearly hadn’t operated in at least 2-3 years, told a very different story.  I was ruined because in between racing around ruins and running up and down hills (those Greeks know a thing or two about scenery and the drama of a mountain view) was spent trying not to (once again) rip my skin off.  Though for some reason, this time around, scraping it off with a dagger or straight razor was not as appealing as burning it off with a blowtorch.  Pointedly asked hubby when getting on the motorcycle “Where is that exhaust pipe that I’m not supposed to press my leg against?”

Spent my jet-lagged nights pondering the question of the ages: is it poison ivy or impetigo?  Either way, it was (and still is) a lasting memento from the Super Spartan race on Staten Island — slogging through 8 miles of mud, crawling under barbed wire, climbing walls and plunging into a tunnel of run-off from the lovely, bucolic and oh-so-hygenic streets of SI. Unemployment has its benefits.  I just don’t know what they are yet.

This entry was posted on October 2, 2011 by snoeberry. It was filed under drama, ewww and was tagged with Super Spartan Race.